Get fresh music recommendations delivered to your inbox every Friday.

by Circle of Witches 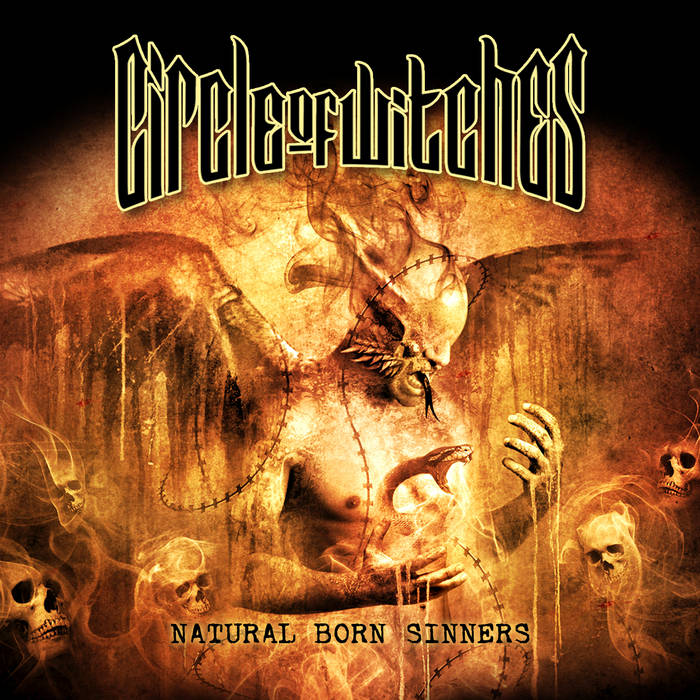 NATURAL BORN SINNER is the third full length from the Italian heavy metal doom band Circle of Witches published in May 2019 on SLIPTRICK RECORDS. The album was recorded during January 2016 and mixed in the later 2017 at ALPHA OMEGA STUDIOS on the banks of Como Lake by Alex Azzali, producer together with Nicholas Barker.
The eleven tracks on the album follow the path of heavy metal and doom with influences of Judas Priest, Grand Magus and Candlemass. All lyrics were inspired by the theme of riot and some characters like Anton LaVey, founder of the Church of Satan, Lucifer, the fallen angel, the witches, warders of ancient wisdom, Giordano Bruno, Italian XVI century philosopher and mage burnt alive by Roman Church, Spartacus, the slave who rebelled against Rome.
The album was written in a couple of months during the 2015 cold winter and was already played during a pre-release European Tour during the 2018 in Austria, Hungary, Germany, Malta, Italy.


TRACK 1
The opener Tongue Of Misery is a track that blows hard against religions and their words full of hypocrisy, against which human’s intellect and disbelief are the only weapons to react. The narrator prefers to be burnt rather than buried in a “sacred” soil. Its riffs are heavier than the others and was also the very first song composed for “Natural Born Sinners”.

TRACK 2
The second track, THE BLACK HOUSE, is dedicated to Anton LaVey’s Church of Satan and it develops its Nine Statements.

TRACK3:
The following songs is an homage to the Italian philosopher, free thinker and mage Giordano Bruno, burnt alive by Catholic Church in 1600. It’s a chapter full of doomish atmosphere.

TRACK4:
THE ORACLE is the fourth track and deals with the figure of Lucifer under his promethean significance. He awakened the intellect and the power of creation in the mankind, against the will of god.

TRACK 5:
The fifth FIRST BORN SINNER is a kind of album themes summary. It quotes all other lyrics suggesting that behind all rebellious (Spartacus, witches, philosopher, the poor victim of Inquisition…) there is the first being defined as Sinner, so again Lucifer.

TRACK 6:
The sixth track tell the story of Spartacus, a slave who claimed freedom for him and his fellow against the Roman Empire.

TRACK 7:
YOUR PREDATOR is a wicked man who struggles for freedom from his sexual mistress. She turned him into a beast, prone at her blood and violence thirst, until he is able to react against the woman.

TRACK 9
DEATH TO THE INQUISITOR, the story of someone persecuted and tortured because under suspicion of witchery. The protagonist is able to strike down the torturer, led by an unknown inner voice.

TRACK 10
YOU BELONG TO WITCHES is a pagan hymn to witches culture, the wisdom coming from rituals of an ancient past and the fear of the common man of this knowledge.

TRACK 11
The song is CULT OF BAPHOMET, an mystic invocation to the great spirit of knowledge.

All lyrics by Mario Bove, all songs by Mario Bove except for tracks 01, 04, 07 by Bove and Aliberti, track 11 by Aliberti and Coppola. All bass lines written and performed by Giuseppe Caputo.
All choirs arranged by M° Francesco Aliberti and performed by Francesco Aliberti, Massimo Leogrande, Viteliseo Dell’Edera, Gianfranco Lafratta and Mario Bove.
Produced and recorded by Alex Azzali at Alpha Omega Studios in Blevio (CO) between January – February 2016. All lead guitars, back vocals and choirs recorded at B-Side Studio, Bellizzi (SA) in May 2016. Additional production by Nicholas Barker, additional recording by Carlo Meroni, Andy Testori, Francesco Petolicchio. Mixed and Mastered by Alex Azzali in October 2017.
Artwork, layout and photos by Nikos Marko – www.zila.gr

Born in Italy in 2004 by the will of Mario Bove (lead voice and guitar). Through the years they collected hundreds of live shows and festivals, a bunch of demos, two Eps and three full-length, the last one entitled NATURAL BORN SINNERS, released 21st May 2019 on Sliptrick Records. Their songs are very often related to ancient Italian history and local stories, paganism, occultism and common life. ... more

Bandcamp Daily  your guide to the world of Bandcamp